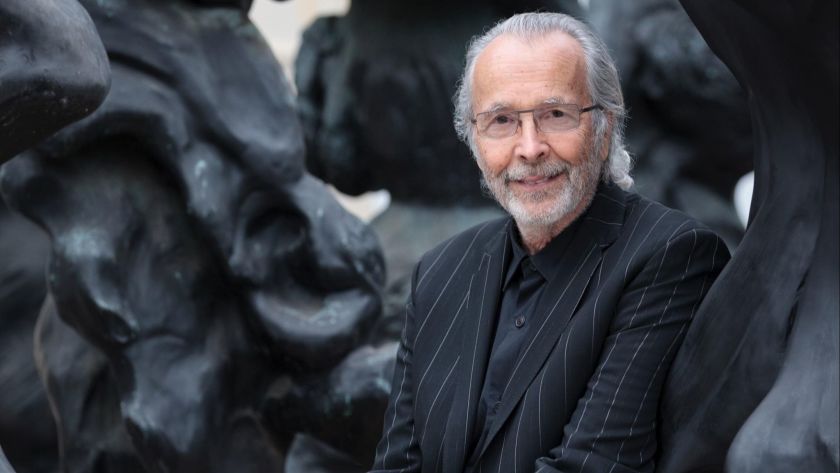 Herb Alpert stands in the midst of a series of totems he sculpted, some of which can be seen at a new exhibit at Heather James Fine Art gallery in Palm Desert. (Philip Scholz Ritterman)

Acclaimed jazz trumpeter Herb Alpert is inspired by sound, motion and shape, all of which play a role in a series of large-scale totems on display through May 21 in Palm Desert.

“I started riffing on the idea and began making what I would call improv jazz poles,” Alpert said by phone from his Malibu home.

He became interested in contemporary art while touring the world with his band, the Tijuana Brass, in the 1960s. He said he visited a museum in every port.

In 1970 Alpert started painting and soon added sculpting to his repertoire. He found that the same urges and instincts that drove him to make music applied to other forms of art.

“I’m a right-brain guy,” said Alpert, who also has abstract mixed-media paintings in the Palm Desert show. “I paint, I sculpt, I play trumpet and I have a good time doing all three.”

Art has been vital to Alpert’s well-being and sense of self since he first picked up a trumpet in elementary school and found that as an introvert the instrument “was talking for me,” he said. That’s why he runs the Herb Alpert Foundation, which funds groups focusing on youth arts education.

“If kids start painting or sculpting or dancing, and if they hang onto it for a while, they get to experience their own uniqueness,” Alpert said. “With luck, maybe they can then experience and appreciate the uniqueness of others.”